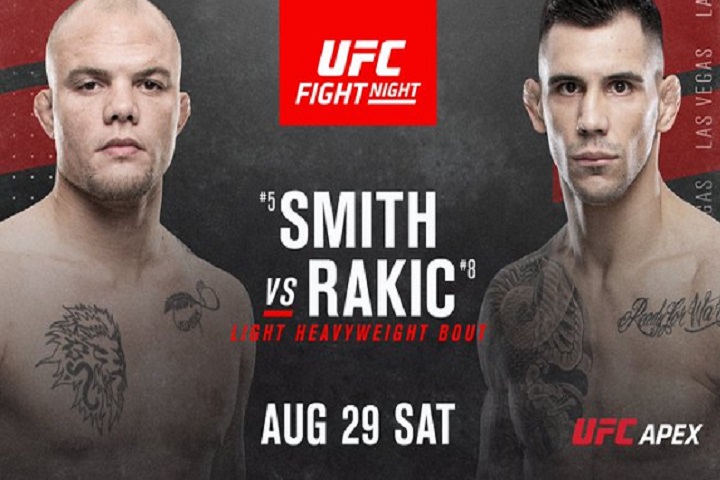 UFC announced Anthony Smith vs. Aleksander Rakic as the new headliner for Aug. 29. The original plan was Zabit Magomedsharipov vs. Yair Rodriguez, but that was canceled once Rodriguez hurt his ankle. The sixth straight headliner for Smith.

Rodríguez pulled out of the bout on August 5 with an ankle injury and Magomedsharipov announced he will not fight on the event as well. The pairing was first scheduled to take place at UFC 228 in September 2018, but Rodríguez also pulled out of that event with an injury. The pairing is now rescheduled for UFC 254.


A light heavyweight rematch between Magomed Ankalaev and Ion Cuțelaba is expected to take place at this event.

Below you can see the full expected fights.


A welterweight bout between Neil Magny and Geoff Neal was scheduled to take place at this event. However, Neal withdrew from the event on August 9 due to a severe case of pneumonia that evolved to sepsis. He was replaced by former UFC Welterweight Champion Robbie Lawler.

A featherweight bout between Alex Caceres and Giga Chikadze was initially scheduled to take place three weeks earlier at UFC Fight Night: Lewis vs. Oleinik. However, promotion officials elected to move the fight to this event for undisclosed reasons.

A welterweight bout between Maki Pitolo and promotional newcomer Impa Kasanganay was briefly linked to UFC on ESPN: Munhoz vs. Edgar a week earlier. However, promotion officials elected to move the fight to this event for undisclosed reasons.