Mandy Rose and Sonya Deville have broken up Fire & Desire faction by the now on.

Sonya Deville was wearing a sympathy and emotionalness face in order to dodge Mandy Rose on SmackDown.

All the things Sonya Deville said to me tonight, I’ve heard before but I’ve never let it define who I am. Yes I’ll admit I’m hurting right now but tomorrow I’ll wake up, wipe my tears and prove to everyone there’s a lot more to me than just a pretty face Mandy Rose took to her twitter to share this to Sonya.

Read out the full recap on what they both had to say in the confrontation.

Sonya Deville walked down to the ring. Sonya took the mic and said filled with emotions that she's been trying to get in touch with Mandy Rose for two weeks now. Rose isn't taking her calls or responding to texts and all she knew to do came out here on SmackDown". She then called Mandy to come out in the ring so that she could have things to clear. Deville waited but Mandy still did not come out. Sonya said "she's never had someone like Rose in her life, from day 1, Tough Enough, and everything else, she's always been there with her, together as Fire & Desire"

Finally we saw Mandy Rose emerged in the ring, she took the mic and said "she has nothing to say to Deville after what she did to her and Otis. Sonya filled with false emotion to explain Mandy Rose and said she had spent most of her you than my family for the past 5 years. Rose not giving her a chance to explain made her feel less than nothing to Rose. Sonya went slow with the demolition and suddenly changed the tune to call Mandy selfish women. Mandy got shocked at this hearing.

Sonya put back some offence on why she cheated Mandy she said "Fire & Desire was never about them. It was all about Rose. They came out to Rose's entrance, waved her magazine around, and everything else". She then dragged Dolph and said Dolph carers you a lot, Look at Dolph and look at Otis. Sonya said "yes she helped Ziggler with the relationship, but that was in exchange for Ziggler helping them and she had their eyes on winning the WWE Women's Tag Team Titles at WrestleMania but it never happened". Sonya called Rose a bottom of the barrel bottled blonde who looks like she was created in a lab.

Rose said, "she is glad she slapped Deville at WrestleMania 36" she then dropped the mic to leave it all behind, meanwhile, we saw the interference from Dolph Ziggler. He said, "they went about this the wrong way and did the wrong thing but Mandy can't fake what happened between he and her". Dolph entered the ring and said Mandy to look into his eyes if she feels anything for her. Mandy said she does not feel anything for him. Dolph tried to touch her but she backed him to not to touch her. Meanwhile, Sonya attacked Mandy Rose out of nowhere. Dolph stopped Sonya and said what she did.

Music hit and we sighted Otis coming in the ring, Dolph and Sonya rolled through the ring rope, Otis checked Mandy, Dolph tried to attack Otis but he caught and dropped him. Otis launched the Caterpillar and a big elbow drop.

All the things @SonyaDevilleWWE said to me tonight, I’ve heard before but I’ve never let it define who I am. Yes I’ll admit I’m hurting right now but tomorrow I’ll wake up, wipe my tears and prove to everyone there’s a lot more to me than just a pretty face. #Smackdown

The Biggest Glitch Between Mandy Rose And Otis's Valentine's... 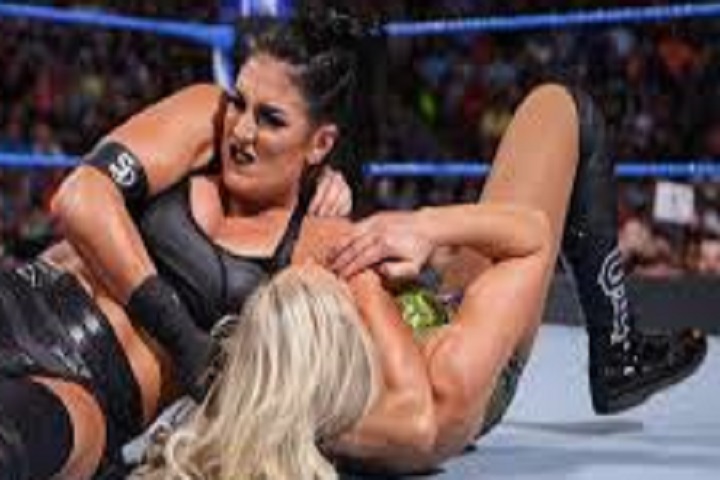 Feud Continues To Heat Up Between Mandy Rose And Sonya Devil...